Police protect women on nights out by tackling inappropriate behaviour

A proactive policing operation in Northampton and Kettering town centres which aims to keep women safe on nights out is proving to be extremely effective at stopping offending behaviour, and in safeguarding the vulnerable.

The operation known as Operation Kayak was first introduced by Northamptonshire Police last year after Covid lockdown restrictions on pubs, clubs and leisure facilities were lifted. It was clear that following the terrible murder of Sarah Everard, women did not feel safe, and much more was needed to be done across the whole of the UK to reduce sexual harassment and violence against women.

Violence Against Women and Girls is a matter of priority for Northamptonshire Police and an area of focus for at least the next three years.

Operation Kayak initially began as a pilot in 2021, and was funded by the Police, Fire and Crime Commissioner. However due to its success, this operation has now become business as usual for the Force.

As part of the op, unformed officers undertake hot spot patrols on Friday and Saturday nights (and on student nights) to help reduce offending, safeguard the public and protect against sexual aggression, harassment, and inappropriate behaviour.

Since it began, officers from Operation Kayak have arrested nine men for sexual offences - including rape and sexual assault. Officers have also provided warnings and words of advice to people seen acting suspiciously, aggressively, or displaying concerning behaviours.

In addition, any vehicles seen loitering in or driving around Northampton and Kettering town centres are stopped to see if their reason for being in the area is valid. As part of the op more than 200 vulnerable people have been supported and safeguarded.

We have received multiple reports across South Northamptonshire of a male stopping vehicles and pedestrians and either asking for money or asking to be driven to a petrol station. They have been using various excuses and on occasions have had another person in the vehicle with them.

If a similar incident happens to you, please inform police via 101 and where possible, capture vehicle registrations and descriptions.

In an emergency when there is a crime in progress , life at risk or an offender nearby , call 999.

You can provide confidential information should you wish to remain anonymous. These calls can be made to the Independent Charity Crimestoppers on 0800 555 111 or visit
www.crimestoppers-uk.org

You can follow our team on Social media to keep updated on more live time information on our daily activities in South Northants Twitter: @SthNorthantsNPT
Facebook: Daventry and South Northamptonshire Neighbourhood Policing Team

You can contact the Neighbourhood Team for any general enquiry using the following email address:
NeighbourhoodTeamSouthNorthants-Towcester@northants.police.uk

Our Neighbourhood team is made up of a Sergeant, Police Offices and Police Community Support Officers - Meet the team

Please be vigilant and continue reporting any suspicious incident/persons/vehicles straight away on 101 – don’t wait!  If it is a long wait you are offered a call back.

If offenders are nearby call 999

You can also report non urgent incidents online.  If it is urgent do not report online.

The Police are very interested in any CCTV footage showing suspicious persons/vehicles.  If residents are struggling to create stills or a copy of the footage then they can contact the Police direct.  They will try to get an Officer to come and assist

In the last year the number of cameras in Northamptonshire’s ANPR network has doubled.  This has resulted in the disruption and detection of serious crime and the arrest of 340 people, putting a ring of steel around the county to deny criminals the use of our roads.

The Police Team use Neighbourhood Alert to send out regular updates on local crime trends for the area of South Northants and crime prevention advice, to register please see the following website for further information www.northamptonshireneighbourhoodalert.co.uk

The Priorities selected by the community for the South Northants Team from January 2022 through to the end of March 2022 remain the same :

Acquisitive crime is defined as an offence where the offender derives material gain from the crime. Examples include, shoplifting, burglary, theft, and robbery.

How good is your memory at remembering details of events you see in the course of your normal activities?  How well would you recall details of events such as a motor accident, a burglary or a fight?
When you report such matters to the police and they push you for greater detail how would you then manage?
In order to help in such circumstances we have been provided by the police with an intel card, to help you record details soon after the incident. 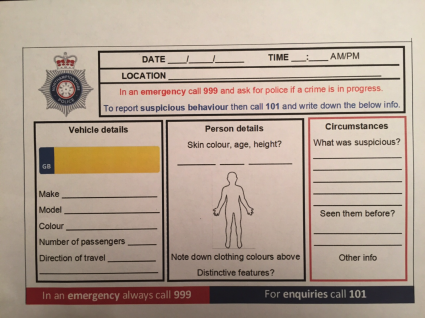 Click here for a printable version of the Memory Jogger

Parish Council objections to the use of Beggar's Lane by DHL lorries.

Could you volunteer to help the elderly and vulnerable in our parish? If you have been volunteering during lockdown or are now working from home, are you able to spare some time to help out?

The garden waste collection service is changing and will become an optional, chargeable service of £42 for all residents in West Northamptonshire Council from 4 April 2022. We arranged for a leaflet to go through the letterbox of all households in the former South Northamptonshire area to inform them of the change and to give information about how to sign up.

Full details about the garden waste service can be found here: www.westnorthants.gov.uk/gardenwaste

Do you know a young person who would like to join the Cadets?

Picnic in the Park

The allotments are located at Eastcote.  If you are interested in taking a plot for the growing of fruit, veg or flowers please get in touch via email:

An illustrated history of life and times in the villages of Pattishall, Astcote, Eastcote and Dalscote. Price £5 plus post and packaging.

A beautiful and useful spiral-bound cook book now priced at a very reasonable £3:50.